You are here: Home / Careers / Difference between Job Change and Career Change

A friend recently met up and we got discussing as to how things are, how is all going, etc. etc. During the conversation he mentioned he is changing jobs and joining a consultancy for web content and web portals. He was a computer graphics and animation professional and he saying that he is changing his job would ideally be joining some other design or media company, or if it is a web content company then it could be designs for web media and so on. So we carried the conversation further with me assuming that he would still be designing some amazing stuff for web marketing and other stuff this time. In that I realized that he is no longer going to be designing anything, but was looking after pure web content, marketing the web content and all things technical about a web-portal. There was no designing involved. I said to him, boss – it is a career change, not just a job change. It struck him there, that what he was viewing as a mere job change was a 360o turn around in his life and a fresh start at something he was aware of, but not taken up professionally. He realized these major differences between a job change and a career change.

Job is something that pays for your work and that in turn helps to pay your bills. Whereas a Career is a domain/profession/industry within which you take up such jobs. Jobs are part of a career. Career is simply a series of jobs in a particular domain.

Also Read:  8 Reasons Why starting a Business may not suit you?

If you are a doctor, it not your job; it is your Profession, right? Your job is where you are a doctor or simply put for example you are a private practitioner then you work as a private practitioner, which is your job. Or similarly if you are a doctor with say a Government Hospital then your job is that of a Government Doctor. In any case, on a larger scale your profession is that of a Doctor; that is your career and not just a job. This is applicable to any field or qualification from engineer to handyman, from programmers to data-entry operators, from architect to workers, everyone. Job is what you do, Career is what defines you. It is like Batman – his job is to save the city from crimes that range from petty theft to large-scale terror attacks; but his career is that of Gotham City’s Protector; that is what defines him, Gotham’s Protector.

Impact of a Job change is minimal compared to a Career change:

While lot of people spend sleepless nights over changing jobs from one company to another, in the long run the impact of a job change can be salary or worst case the company may shut down and you would be looking for a new job again. That is important, however, the effects are not as long term as that of a career change. In a career change, you will be starting from scratch, while in a job change you will atleast have the same skill-sets to fall back on that you acquired in the course of your last jobs. In a career change the learning curve would start all over again and in most cases you would be again starting to work your way up the ladder of growth.

Also Read:  8 ways to Make money from Nothing, almost!

People know you by your Job but Remember you for your Career:

Job will make money for you to make your ends meet or take of your expenses and pay the bills and one day make you rich. But it is all depended on your profession in which you take up a job. You will change jobs and take new ones and this whole chain of jobs and employment will be part of your Career, it will be your identity beyond a point. While you are working you will be known by your designation, say that of a General Manager or Manager or Vice President and so on, but you will be known by your profession as a whole like if you were in a pharma company you will be known as yes, you were in the Pharma sector or in the Railways or Bank or whatever your industry was. That is your identity and this is what your career gives you.

Also Read:  How technology helps to Make and Manage Money 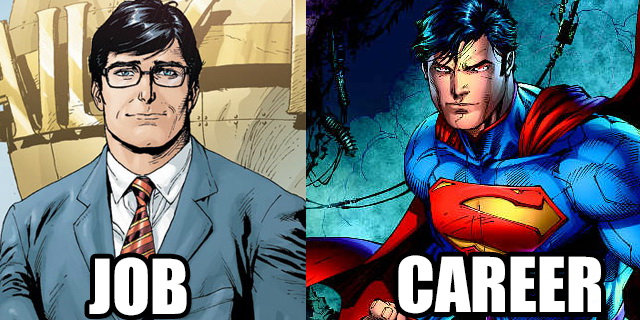 When you change a job you will need acclimatising to the new work environment, work culture and people. Your skills still are the same, and the most you need to hone them better and improve on them. However when you talk about a career change it changes everything that changes in a job plus the requirement of your skill set and the experience you have becomes less important to an extent. Yes at times in a related industry certain experiences and skills overlap, but in most cases the learning curve starts again.

Remember, career is a way broader term than a job. Never mistake a Career change as being a mere change of job since career change has its own challenges.